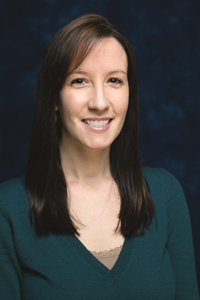 Julia received her B.S. in Biology in 2003 from Utica College in Utica, NY and worked in the lab of Dr. Lawrence Aaronson as an American Society for Microbiology Undergraduate Research Fellow. She received her Ph.D. in 2008 at the University of Pittsburgh. Julia worked in the lab of Dr. Graham Hatfull where she studied the recombination systems encoded by mycobacteriophages to develop a genetic system for manipulating Mycobacterium tuberculosis. As a graduate student, she received the Andrew Mellon Pre-doctoral Fellowship, Ivy R. McManus Award, and the Nat L. Sternberg Thesis Prize. Following her graduate work, she became a postdoctoral fellow in the lab of Dr. Bonnie Bassler at Princeton University. She received an NIH/NRSA to support her research on LuxR transcriptional control of quorum-sensing genes. Julia began her independent career at Indiana University as an Assistant Research Scientist in the Department of Molecular and Cellular Biology in 2014. She was promoted to a tenure-track position in the Biology Department in 2016.